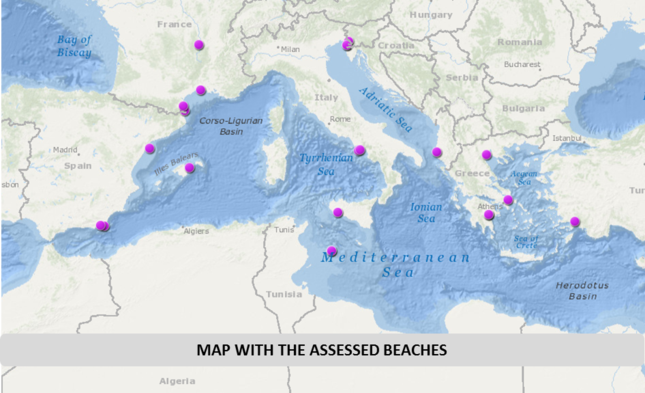 Map with the assessed beaches

A total of 17,344 marine litter items were recorded in 16 coastal and marine protected areas of Albania, France, Greece, Italy, Slovenia, Spain and Turkey. This amounts to a relatively high average litter density of 1,048 items/100m stretch or 0.6 items per square meter. The majority of litter items were made of artificial polymer materials and accounted for 82% of all litter. Litter from shoreline sources, such as tourism and recreational activities and poor waste management practices, accounted for 27% of all litter collected; while the amount of litter from fisheries and aquaculture was at a level of 10%. The most frequently found items included small plastic and polystyrene pieces (21.9%), unidentified plastic caps and lids (5%), mussel nets (5%). Single-use plastics such as drink bottles, food containers, cups and cup lids, cutlery and trays, straws and stirrers accounted for one fifth (21%) of all items recorded.

The ACT4LITTER Marine Litter Watch Month is a participatory-science showcase, where MPA managers have become a taskforce that provides reliable, accurate and comparable marine litter data. The project provided a set of carefully designed and piloted? webinars to enhance the managers’ skills on how to monitor marine litter  by using a standardized beach litter monitoring protocol.

“During our first ACT4LITTER beach litter monitoring survey we really felt like going into the wild. We had done nothing similar before and we were not certain of the quality of the end result. Nevertheless, we followed closely the methodology provided by the project and we realized how feasible it is to put it into practice. Classifying marine litter items was a thought-provoking endeavour that made us realize a lot about the actual sources of the problem and what it takes to deal with it”, said Gloria Garcia Hoyo, Technical Advisor at the Cabo de Gata-Níjar Natural Park/ UNESCO Global Geopark, Spain.

Martina Markov, Marine Biologist, of the Kornati National Park, Croatia explained how the ACT4LITTER project changed her viewpoint on the marine litter issue.

“Before getting involved in ACT4LITTER, we were regularly organizing cleanup operations in our MPA without even considering the importance of analysing the litter collected and gathering scientific evidence about this threat. Now we realise that without sound data and enhanced knowledge we cannot advance our work towards identifying targeted measures to tackle this threat at its source”, Martina says.

The ACT4LITTER Marine Litter Watch Month has altogether connected some 20 MPA management bodies, NGOs and other organizations, which joined forces in order to shed light on the marine litter threat in Mediterranean coastal and marine protected areas. It was launched in 2018 and counts to date 4 editions (winter, spring, summer, autumn). The initiative will carry on within the framework of a follow-up project, namely the Plastic Busters MPAs, also funded by the Interreg Med.

“The ACT4LITTER Marine Litter Watch Month has been an effective tool to gather essential marine litter data. Not only does it provide valuable baseline information on the amounts and the full spectrum of marine litter deposited on the beaches of protected areas in the Mediterranean, but it also serves as a useful blueprint for the setup of participatory-science campaigns”, says Thomais Vlachogianni, who coordinated the activity and is a Programme Officer of the Mediterranean Information Office for Environment, Culture and Sustainable Development.

All news
Back to top